Hero Of The Hour

As part of our Uniforms on Duty series, we spoke to Katie in Kerry who told us about a morning she’ll never forget. 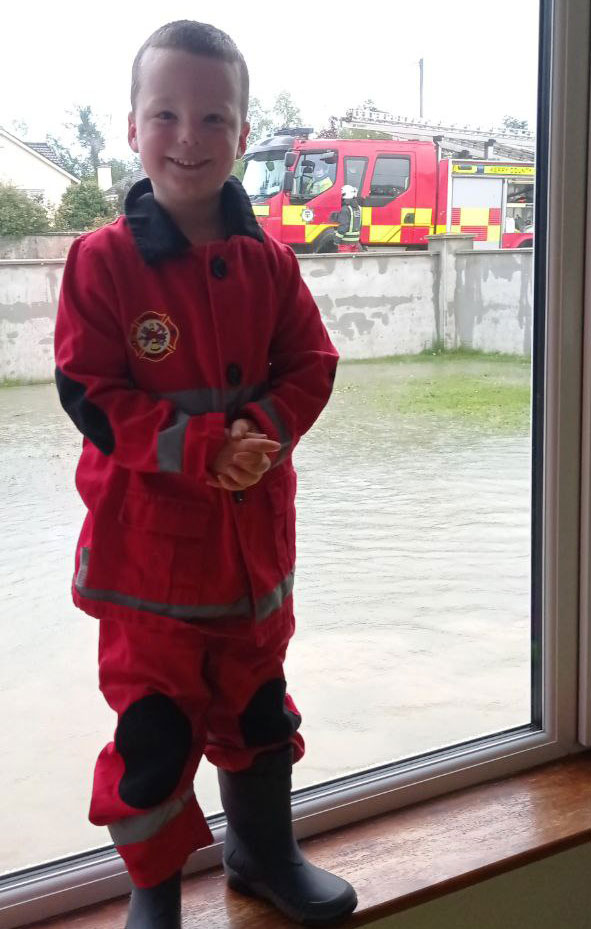 A phone call at 5.30 am rarely brings good news.

On May 12th last year, my husband and I were woken by our neighbour telling us the water mains had burst just outside our house. When we looked out, we couldn’t believe the amount of water that had appeared; our house felt like a moat and was just centimetres from being flooded.

But while my husband and I were extremely anxious, our four-year-old son, Jamie, was having one of the most exciting days of his life.

Jamie is obsessed with Firefighters. He’s constantly going around the house putting out fires. For Christmas 2020 he got a big fire engine from Santa, along with a My Little Uniform Firefighter costume. So when a fire engine full of real, live Firefighters pulled up outside his home, he couldn’t believe his eyes!

Straight away, he hopped into his suit and got to work. Although the water levels meant he couldn’t get outside to the men, he decided he had his own job to do. He worked endlessly to “pump out the water from the inside”. To us, he was the real hero, saving the house from flooding.

The funny thing is that the night before, Jamie had made a very specific request. He had asked us to set out his uniform and boots like a real Firefighter would: hung up and ready to jump straight into. He wanted his fire engine parked up beside it too so that he would be ready for work the following morning.

He’s never asked us to set up his suit in the same way since. It only happened the once, the night before the flooding drama. But he wears it regularly and loves to go to see the fire engines at Farranfore airport, close to our home. He and his brother are always acting out dramatic rescues, with his brother dressing up in his paramedic costume to rush to the scene.

In case you were wondering, our house wasn’t damaged at all. The Firefighters did a fantastic job. We had been so worried that we were going to have to find somewhere to stay: not an easy job with three children under four!

But if it ever happens again, our own little Firefighter knows exactly what to do.

Firefighter Jamie is wearing one of our original Firefighter uniforms out on duty and we are delighted to hear he is enjoying his time as a Firefighter saving his family. Thank you Katie for sharing the story Jamie’s heroic efforts.